CHS net income for fiscal 2016 (Sept. 1, 2015 – Aug. 31, 2016) of $424.2 million was down 46 percent from $781.0 million for fiscal 2015, reflecting lower pre-tax earnings within the company’s Energy and Ag segments, as well as its Corporate and Other category. Lower pre-tax earnings within these two segments were partly offset by increased pretax earnings in its Foods segment, and seven months of earnings from its Nitrogen Production segment which was created by the February 2016 strategic investment CHS made in CF Industries Nitrogen, LLC (CF Nitrogen). These results reflect the continued economic down cycle in the company’s core energy and agriculture businesses, as well as the impact of one-time events.

“Like others in our core businesses of agriculture and energy, the ongoing global downturn continued to affect both our earnings and revenues in fiscal 2016,” said Carl Casale, CHS president and chief executive officer. “Meeting the long-term needs of our owners and customers remains our priority as we continue to take prudent actions to ensure the company remains financially sound and positioned for future opportunities.”

Revenues for the fiscal year were $30.3 billion, down 12 percent from $34.6 billion for fiscal 2015, primarily due to lower prices for the commodity energy, grains and fertilizer products that comprise much of the company’s business.

CHS reports results for its agricultural inputs, grain marketing, local retail and processing businesses under the Ag segment. The company recorded fiscal 2016 Ag earnings before taxes of $30.9 million, down 79 percent from fiscal 2015, a year in which results included a $116.5 million one-time impairment charge resulting from its decision to cease planned development of a nitrogen fertilizer plant at Spiritwood, N.D.

Within the Ag segment, earnings for the company’s Country Operations local retail businesses declined primarily due to lower grain margins. This was partially offset by higher grain volumes in fiscal 2016 compared with fiscal 2015. Lower margins also contributed to a decline in earnings for the CHS wholesale crop nutrients business. CHS grain marketing earnings also decreased in fiscal 2016, primarily due to lower margins which were partially offset by higher volumes. CHS Processing and Food Ingredients saw lower year-over-year earnings for fiscal 2016, primarily due to costs associated with the sale and impairment of assets, along with a specific customer receivable and, to a lesser extent, lower soybean crushing margins. The company’s renewable fuels marketing and production operations also declined from fiscal 2016 as a result of lower ethanol market prices, also partially offset by increased volumes.

CHS recorded fiscal 2016 income before taxes of $34.1 million, net of allocated expenses, from its February 2016 investment in CF Nitrogen reported in the company’s Nitrogen Production segment. In addition, CHS recorded fiscal 2016 pre-tax earnings of $64.8 million, net of allocated expenses, for its ownership in Ventura Foods, LLC, under its Foods segment; these results had previously been reported under the Corporate and Other heading. Within the Corporate and Other category, CHS reported slightly higher earnings for fiscal 2016 for its business services operations, including the company’s insurance, risk management and financing businesses, while year-over-year income from its ownership in the Ardent Mills, LLC, wheat milling joint venture declined. 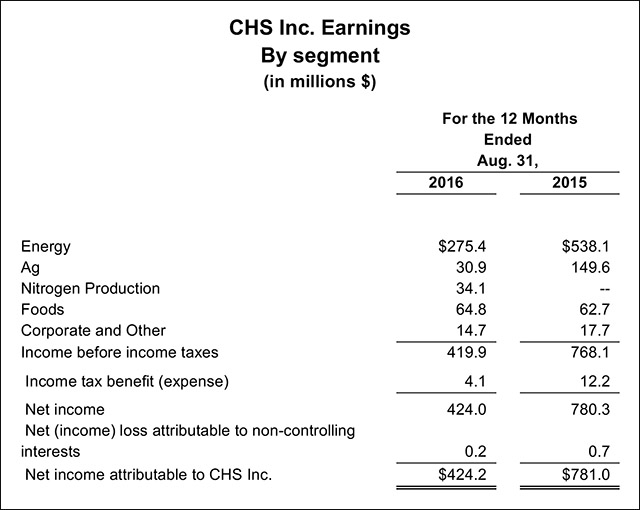